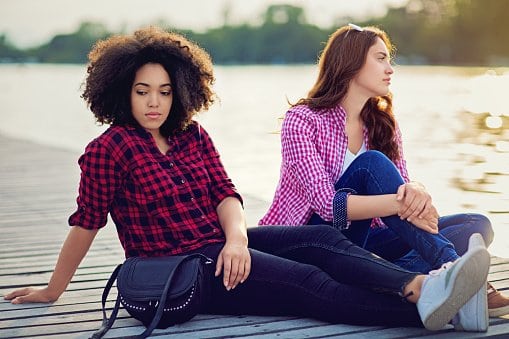 Outgrowing a friendship can be a very difficult experience. It can leave you spending hours analyzing healthy vs unhealthy relationships to determine which kind of friendship you have with certain people. Often, we overlook signs a friendship is ending or signs that a friendship needs to end.

Over the last ten years, there have been several times in which I was outgrowing a friendship. This is difficult for me to write about for a couple different reasons.

One reason it’s difficult for me to write about my experiences of outgrowing a friendship is that I still care about those friends. I don’t ever want to appear as if I am bashing those friends or that I believe I am superior to them.

That is not the case at all. I spent a lot of time processing whether or not we were supporting each other or if we were in codependent relationships. When you have been friends with somebody for a long time, it can be hard to be honest about the truth of the friendship.

That was true for me. That guilt is also the reason I continued an unhealthy friendship for many years. Now, I have learned to let go of that guilt because I needed everything to unfold in the way it did for me to see the truth of healthy vs unhealthy friendships for that particular relationship.

I had a friend since the age of four. Let’s call her Vanessa. We had similar upbringings with alcoholic fathers and divorced parents. For many years, Vanessa seemed to be the only one who truly understood my emotional pain.

Also, Vanessa was an amazing friend for many years. Again, that is why it’s so hard when losing childhood friends because there is so much history there. There were many times where we were supporting each other when it seemed nobody else supported us.

Friends Not Being Friends

The changes I began noticing occurred when something good happened for me that Vanessa had yet to experience for herself. I can recall when I bought my first house and thinking Vanessa would be so excited for me. We were always supporting each other, so why would this be different?

Well, it was different. It was very different. I’m not going to go into details about this for brevity’s sake, but I will tell you a comment Vanessa made several months later when she decided to buy a house as well.

She said, “Well, I just started think that if you could buy a house and I make a lot more money than you, then so can I but I’m going to buy a nice house.” At the time, I ignored that comment. I spent hours listening to her through the house buying process and being happy for her. I just tucked her comment away.

There were many other instances in which I knew I was outgrowing a friendship with Vanessa, but I tucked all of that away too. The “final straw” was her behavior at my wedding. It showed me what I had known all along.

The morning of my wedding, my friends were supposed to come help me get everything set up and just spend time with me. Vanessa showed up two hours late wearing a big, new hat. The first words out of her mouth were, “Y’all look at my new hat I bought. I have had so much fun shopping at these cute little stores here all morning.”

All of my friends were stunned that she just admitted she was out shopping instead of being my Maid of Honor. It got much worse from then on. It became obvious to my other friends that I was in fact, outgrowing a friendship. They stepped in from that moment on to protect me from her negative energy on my wedding day.

Vanessa was getting angry as she realized what my friends were doing. She was supposed to walk down the aisle before me but was nowhere to be found at the time. She moved the camera so that my walking down the aisle was not recorded.

During our cutting the cake, she told the photographer that I wanted her to get pictures of her with the animals far away from our cake cutting. That wasn’t captured either. Those things were all pretty bad, but the worse came when she was giving a speech at the reception.

Struggles with Ending a Friendship

As I am typing this, I am realizing that I still have some work to do on releasing my anger towards her. I will do that because it’s not serving me.

Her speech was about how horrible of a friend I was when we were kids and how I was so mean to her. Vanessa talked about her journal entries as a child that she wrote about hating me. She told everyone couldn’t believe that I had found somebody to marry me.

Thankfully, my brother stepped up and gave a beautiful speech and everybody seemed to just ignore what Vanessa had said. She was incredibly drunk and truly made herself look bad.

Now, please don’t think that I am trying to shame Vanessa. I am merely explaining how outgrowing a friendship and losing childhood friends is hard. I know that Vanessa was struggling with my getting married first.

I think that she was also struggling with my being in the spotlight as she is used to being the one there. I know so much about her childhood and it makes me sad to know the reasons for her behavior were rooted in childhood trauma. However, I had to pay attention to the signs a friendship was ending for me in order to leave space for friends who were capable of supporting each other as we should.

You may be thinking about your own experiences of outgrowing a friendship now. You may have experienced losing childhood friends as well. As I did with Vanessa, you may have missed or overlooked the signs that the friendship needed to end.

So, I’m going to share my learned experience on outgrowing a friendship and give you Three Signs a Friendship is Ending. Keep in mind that the friend may not be aware that it is ending. If you struggle with ending a toxic friendship, click here to read 5 Steps to End Toxic Relationships Without an Explanation.

Three Signs a Friendship is Ending:

If you are outgrowing a friendship, then you have lost the happiness that friendship brought you. Pay attention to how you feel after talking to or spending time with that friend. Be honest with yourself.

Recently, I realized I was outgrowing another friendship because I no longer felt peace or joy after talking to that friend. She had a lot of anger and hatred towards white people and I will go so far as to say that she was racist.

Now, as a privileged white woman, it is difficult for me to talk about a black person being racist because that is a touchy subject and for good reason. I will never know what it’s like to be black and experience that kind of racism. However, I do also know that reverse racism is real.

My friend and I would talk on a daily basis. It got to where every conversation turned into her talking about hating white people. She even went so far as to say, “I hate every white person, except for you.” When I called her on that, she said it was a joke.

That’s not a joke I would ever make, nor would an emotionally healthy person. Yes, she has experienced horrible things from some racist white people. However, that comment made me sick to my stomach.

On top of some other things, I realized that her daily spewing of hatred towards white people left me with everything but peace or joy. That is one of the incredibly important signs that a friendship is ending if you value your peace and joy. If you are continually missing that peace or joy after interactions with a friend, then you are outgrowing a friendship.

One of the most important parts of a friendship is mutual support. If you are not supporting each other, that is not a healthy relationship. This is not to say that a friend should always support you in everything that you do and in the best way possible.

That is not realistic, but if you realize that you are continually not supporting each other then it’s time to move on. Think about things that are going on in your life now, what support do you need? Are you getting it?

It’s also important for me to talk about the importance of asking for what you need in friendships. If that’s hard for you, read my post Struggling to Get Your Needs Met. Remember that your friends will not always be able to meet your needs.

By now, you are probably thinking about a friend or two that you have and whether you are outgrowing a friendship. How much time and energy have you spent considering whether that friend is truly the kind of friend you need?

Have you voiced what you need or want to the friend. If so, and he or she is consistently unable to give that, then that is one of the signs a friendship is ending.

Now, let’s talk about the grief that comes with losing childhood friends or when you are outgrowing a friendship. That grief can be intense. I know that all too well.

Still, there are times when I will think about Vanessa and want to tell her about something going on in my life. I allow myself to be sad and practice self-care when that sadness pops up. At the same time, I also have to remind myself that our friendship was not healthy for me and that it began causing more pain than peace.

I don’t need to erase the good memories or forget that our friendship ever existed. For many years, she was the friend I needed. Outgrowing a friendship doesn’t mean that you don’t sill love the friend, wish them well, and miss the times that were good.

Outgrowing a friendship simply means that you are choosing what is best for you. Do not expect the person whom you are ending the friendship with to understand your decision. If he or she were willing or able to see what you were experiencing, then there probably wouldn’t be a need to end the friendship.

In closing, I will say that as hard as it is to end a friendship, but it is also healing to choose joy and peace. When you close out a healthy relationship, you are creating space for a new and healthy friendship to bloom.

wpDiscuz
0
0
Would love your thoughts, please comment.x
()
x
| Reply
Share this ArticleLike this article? Email it to a friend!
Email sent!